It’s been a while since my last dip into the beet spread, so with the sun going south I thought this would be an opportune time for a gentle tug on the soul vine.

In many ways, the long hours of darkness are probably best suited for silence and reflection. Especially in this era of much digital dilution in our dialectic diets, the thought of cramming a few more words into the last remaining season of mental open space feels a bit intrusive, if not indulgent.

And yet, times like these are also good occasions to turn off the static in our heads, take it down to the gut level, dig to the root of it, and find that higher glyphic range. So let me shovel up the real dirt on why I remain an optimist, despite all the gremlins in my head begging me to reconsider, in the hopes that these little bulbs of light will throw a few nourishing shoots across your inner winter.

It all started with an article I read by Rebecca Solnit on how one magical politician won’t stop climate change in which she writes about the many people she encounters who are bitterly disappointed in and generally bitter about anything from President Obama to the state of the planet. Reading it made me ponder where my own optimism springs from, especially in the face of the daunting ecological challenges I dedicate much of my brainspace to these days.

The best explanation I could come up with relates to my experience as a musician, back in the days of Chemystry Set sojourns through dingy back alley bars and clubs of San Francisco. Strangely enough, some of my favorite gigs ever took place in almost empty rooms, with maybe a grateful bartender or happy drunk hootin’ and hollerin’. It’s not that I loved schlepping around a bunch of gear for neither glory nor pay, but it was perhaps the very lack of these more obvious and expected rewards that trained me to focus in on other, more visceral benefits: enjoying my bandmates, creating beautiful music together, and connecting with what- and whoever was there, instead of fretting over what and who wasn’t.

In other words, what mattered was the present moment and how to make the best and most meaningful of it, under any given circumstances. 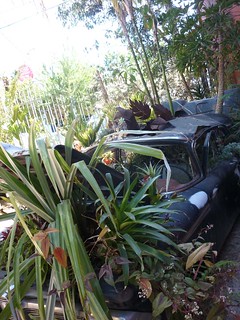 And so it goes with my eco-musings: Sometimes there are victories (Yay Paris agreement!) and sometimes there are defeats, but my motivation to keep advancing a livable planet depends only in very small part on conventional metrics of success. Sure, it would be nice if we could pay more attention to the healing powers of soil or treat our cities more like our gardens, but just seeing and feeling the awesome regenerative powers of the earth burst through the cracks in the pavement leaves me no choice but to keep the inner flame going. If the mothership can keep responding with such resilience and generosity despite all the stress we inflict on her, then the most natural thing I can do as a temporary passenger is to keep putting out a similar positive, life-affirming energy, whether my example is followed or not.

Because really, while I personally have very little control over where it is we are collectively headed, what I can influence in my short time on this planet is my own role in how we journey together. Hence, what floats my boat is the deep love and gratitude I have every day for being able to get up, feel the sun and breathe the air. What rocks my world are all the organisms I’ve been fortunate enough to have been sustained by and marvel at. And what tickles my soul are all the kindred spirits and righteous creatures I’ve shared laughter, creativity and essence with. 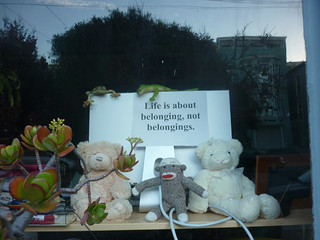 The mere fact that I get to be part of this grand cosmic experiment, the simple awareness of this miracle of all miracles called life, is what gives me big bang-like energy and an insatiable reservoir for optimism. Not blind or naive optimism, I may add, and not without moments of darkness and doubt, but an optimism of the heart that both celebrates what is and fights for what needs to be. Trying to be the change I wish to see.

Being here on this beautiful planet, manifest as a universal being in body form with the ability to be conscious of that, has got to be the most amazing gift any of us have ever received. Working to keep the earth’s lifeblood — air, water, soil — functioning for future generations to be able to experience the same blessing feels like the happiest and most satisfying song I could sing in my short time here. Whether the whole world is listening or just the bartender in the corner.

Wishing you clarity of mind, depth of heart, and lots of sounds from underground for 2016!

PS: Speaking of Chemystry Set, check out the new website I put together. With everyone listening to tunes on their tablets and phones I thought this would be a good time to get the site up to date and give it a bit of a facelift while we’re at it. It features recent nuggets like Baba and I’s reinterpretation of Thwart for the Climate Message Video Festival, as well as old favorites like What We’ve Got, a song about patriarchy, fear, exploitation, and systems of oppression off the Cobblestone Below My Feet album, brilliantly sung by Patty and as relevant as ever in this era of enhanced phobias and otherings we once again find ourselves in.

PPS: And speaking of websites, should you find yourself in need of a site or other content wizardry, check out the portfolio I have sprouted over the last couple of years as a cover crop between eco-musings and urban plannings, and give a holler if you need help with your next project.

PPS: I’ll leave you with a Best of 2015 collection from Sven’s World of Words (and Visuals)…

Turning Waste into Wine: A Pilgrimage to the Composted Land
What Your Garden Can Teach About Cities
My ten years of American citizenship and what it means to me
Car is Over (If You Want it)
Postcard from Abu Dhabi: On the Road to Masdar City, Desert Ecocity in the Making
Why I don’t have a candidate