The Star Waltz Creation Story is the book’s introduction written by Sven. From spider webs to volcanoes, it sets the tone of the book, taking the reader on a journey to “higher” ground. 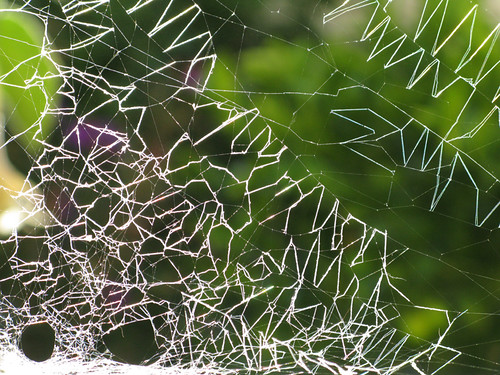 Like an enormous spider web, life is spun between invisible pillars. No single thread determines the strength and balance of the lifeweb; rather, a network of woven strands and strategically placed anchor points comprise its intricate fabric. To sustain itself, the web must be designed to evolve through adverse conditions, made to sustain the greatest storms, bending and stretching to accommodate the unexpected. If pushed too hard in any one direction, it collapses. Its inhabitants need to live and move about with an innate understanding that—whichever part of the structure they find themselves supporting—they play an integral role in its overall health and vitality.

Now visualize all the webs of the world connected to trees, bushes, drainage pipes, and window sills, forming another, even larger web. See these trees, bushes and drainage pipes in the midst of mountains, meadows, and cities. Envision the mountains, meadows and cities as part of a system of continents, oceans and cultures which make up this little round ball we call planet Earth.

Don’t stop there. We all know that the earth joins a ring of planets in their collective dance around the sun, forming a cosmic web held together by gravity and atoms. Our solar system joins others, and together they make up a galactic web that in turn stands in relation to other galaxies that are inextricably bonded within an ever expanding universe. The Universe is nothing but a word for all there is, a simultaneous beginning and end-point, an unspeakably creative source giving expression to all its resident webs and ecosystems.

The universe’s creative force is reflected in all of us. As volcanoes form new and spontaneous land masses, so are you and I constantly invited to create and experience things we’ve never felt and seen before. As ancient stars burn out and new ones emerge, so are you and I engaged in the continuous flow of both physical and emotional death and rebirth. As the planets make their rounds, so are you and I on an ongoing journey to experience the twists and turns of life.

Life is constant movement—a perpetual dance! To learn, to understand, to embrace it, you have to open up to the rhythm and energy that surrounds you. The Ohlone people, a native tribe from coastal California, had a song called Dancing on the Brink of the World. Nothing but the name is known about this song, yet this beautifully mysterious title may carry with it the key to all universal knowledge. Can you see yourself dancing on the edge of the cliff, moving to the rhythm of crashing waves, guided only by the the light of the moon? To dance on the brink, the Ohlone seem to say, is to communicate with each other beyond language, to communicate with strangers, indeed, to communicate with the entire universe.

Dancing on the Brink of the World is meant to convey these boundless creative resources of the universe. Journeying through the ancient archetypes of astrology in playful and contemporary ways lets you connect with the planets and stars from the soft, warm core of the heart rather than the sharp edges of the mind. It is astrology without the astrologer, if you will—inspiring the mysterious place in your soul where the music plays the band, the story tells the writer, and the painting paints the painter.

The Star Waltz is an invitation for all of us to get up and dance to the rhythms of the universe. It’s a humble offer to dangle from cosmic spider webs and a reminder that the planet we live on is a precious ecosystem. It’s an advertisement for the creative spirit in all of us as the magical tool to understand the mechanisms of the soul, and, it’s a tribute to all the ancestors of the world who saw God’s simple essence whenever they looked up to the sky. If you listen closely you can still hear the song…